Water is the oldest resource of energy which humankind is using in its favour. Till today, it remains the most important renewable source of energy. 21,6% of all electrical energy in the World is produced using the energy of water – hydro energy. Hydro energy can also be used for building cooling.

Our ancestors started using it thousands of years ago. For centuries hydro energy did all the heavy work for humankind. It was used for propulsion of mills, sewing machines, pumps and similar applications. But it was not until last century that humankind realized that hydro energy can be converted into electrical energy – electricity. 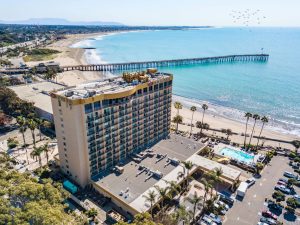 In 2015, hydropower generated 16.6% of the world’s total electricity and 70% of all renewable electricity, and was expected to increase by about 3.1% each year for the next 25 years.

Its use depends on climate and geographic conditions. Hence, some countries can produce a major proportion of their total electricity with the help of water.

Mainly hydro energy is used for the production of electrical energy, while we have almost forgotten that we could use hydro energy as energy for cooling and heating of the building nearby the shore.

For example, along the Adriatic Coast of Slovenia, Croatia, Montenegro the sea has approximately 15°C at 13 meter of depth by the end of November. Which proves that there is heating capacity in the fall. The reverse situation happens at the end of May, where the Sea has enough cooling energy that can be used for building cooling.

In our case, we regard the Sea as a natural energy accumulator – a renewable energy source that offers free energy storage at near zero emissions!

Menerga decided to pursue this opportunity and created a specific hybrid unit that uses the energy potential of this cost-&-emission free renewable resource of seawater.

While Menerga created this unit, we can also help you planners and investors to integrate this units in their projects.

Example: Using the sea to cool in the summer – how it works?

To get the water to the Rewatemp hybrid chiller and heat pump unit, the pipes have capture water 100 meters  from the shore on 13 meters of depth. On this depth the water temperature is stable. Even extreme weather conditions (e.g. storms) can’t affect the water by cooling it down on this depth.

The Rewatemp hybrid unit uses the seas cooling capability in the first months of spring and the seas heating capability in the first months of fall. This is possible because the accumulated energy in the seawater enables approx. 2 months delay in usage. So the stored energy from spring is used for cooling in the summer and stored energy from fall in used for heating in the winter.

A reduction in savings of over 30%

The same is true for the operation of this unit. In order to operate it, there are no chemicals or additives used that could make water environmentally unsafe in any way. The water that is taken from the sea and returns to it practically the same – only a few degrees warmer/colder.

The usage of renewable sources and effective use of energy has been for example encouraged in the slovenian Municipality of Piran – in the private and public sector.

Municipality of Piran had the ambition to create an environmental impact case study about the use of hydro energy for heating and cooling buildings near the Bay of Trieste, Italy.

Together with some other partners, an application was filed, but sadly later dismissed, due to insufficient funds. Despite not being successful, tendences into this direction are right and soon ambitions will create positive impact.

Currently the Municipality of Piran is studying the possibility of Hydro Energy usage for heating and cooling the Tartini Theatre.

Furthermore, Hotel Bernardin has started using the Hydro Energy for heating and cooling of their two hotels. With this decision they will reduce the cost of energy in the long run for more than a 1/3.

Hybrid Heat Pumps & Heat Pipes – a variation of the solution

Building cooling with the sea water is easily possible to achieve with the help of hybrid heat pumps.

Geothermal thermal measurements show that the temperature changes only in the first 10-20 meters below Earth’s surface. This happens due to atmospheric influences. While at greater depths the temperature remains mostly constant – and raises only about 3°C every 100 m of depth.

In areas where sea water isn’t available, we can use underground heat pipes, for getting small quantities of heating energy from several 10 meters of depth.

A heat pipe system consists of four pipes, which are two-by-two connected into a loop. In addition, a fifth pipe serves to fill  the borehole with concrete, which serves as an efficient heat conductor.

Inside the pipes there is a refrigerant (closed loop system) that circulates, which takes heat energy from the earth and transfers it into the heat pump.

The heat pump additionally heats the water in the heating system to the desired temperature (for example, up to 55°C) or cools it down in summer.

The most efficient use of this system is additionally with low temperature heating in the form of floor heating or wall heating. For the heat pump to operate, electric energy is needed.

The COP of this hybrid unit is 3 to 4. This means that for 1 kW of electricity consumed 3 to 4 kW of heat are obtained.

The RewaTemp unit is a hybrid unit that consists of a chiller and heat pump that integrates into a compart device which enables the preparation of heating and cooling energy. In order to do that it uses renewable sources of energy – like in our example the nearby sea water.

Learn more about this hybrid unit and the ways it can be implemented in your project.