In their applications in industrial facilities, food and beverage stores, residential buildings, and data centers, the areas of application of the 120 million HVAC and refrigeration systems in Germany are extensive and highly diversified.

Industrial and commercial users particularly depend on refrigeration and cooling technology – and modern residential and office buildings are no longer possible without sophisticated climate-control technologies. Although these systems of course make our professional and private lives easier, they on the other hand tremendously burden nature and our environment: for example, almost 60 million metric tons of CO2-equivalent emissions arise annually as a result of refrigeration and cooling systems in Germany alone.

This is equivalent to approx. 40 percent of the emissions of all motor vehicles on all German streets and roads – and the tendency in this area is upward. Major efforts by politics and the economy are necessary to reverse this trend. 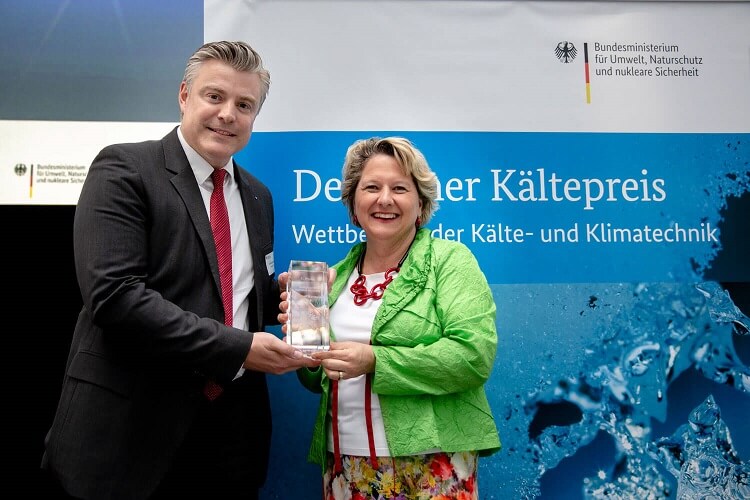 In 2018 the German Refrigeration Prize is now being awarded for the sixth time. The three prize categories reflect the extent of forward-looking developments and the great diversity of the fields of application. The German Federal Ministry of the Environment, Nature Conservation, and Nuclear Safety awards prizes for each of the three categories in the amounts of €2,500, €5,000 and €10,000. The objective of these awards is to support further development and public awareness of the prize-winning projects. The competition organization has once again taken over the non-profit company co2online GmbH, together with the Refrigeration Working Group (Arbeitsgemeinschaft Kälte).

To exploit the energy savings potential of HVAC and refrigeration systems, the German Federal Ministry of the Environment, Nature Conservation, and Nuclear Safety (BMU) has since 2008 supported efficiency measures for such systems. The use of highly efficient components and systems means that these technologies consume less energy and thereby enable reduced CO2 emissions arising from electric power generation. The use of refrigerants with slighter greenhouse effects can reduce direct emissions as well.

In support of these efforts, the German Refrigeration Prize invites submissions on a regular basis. In 2018 as well, the award organizers searched out companies and persons who develop and apply especially low-emission solutions in the refrigeration and HVAC technologies. The winners can look forward to prizes with a total amount of €52,500.

120
million refrigeration and
air conditioning systems in
Germany cause

17 %
of electricity consumption
in Germany and

When evaporating water cools the human skin, we call this an example of adiabatic cooling. As part of especially energy-efficient technology, this principle has become predominantly accepted for the climate control of rooms: since additional energy is necessary only for air circulation and for humidification of the air. On hot and humid summer days, however, adiabatic cooling reaches its limits, because outdoor can no longer be sufficiently cooled. Menerga, with its Adconair Adiabatic Zero GWP, has developed a system that uses an additional cooling stage to sufficiently cool the air on such days – without the use of additional climate-control units.

A dream team for room cooling

By adding a second cooling stage to the proven adiabatic cooling system, peak loads are handled during the few days in the year when this is necessary. The second cooling stage is switched on when required. It consists of a plate heat exchanger that is integrated in the air handling unit and that can – in accordance with the principle of dewpoint cooling – cool the air even further, down to the dewpoint of the outdoor air.

Recent Posts
Get in touch with us today!