The global warming we experience today is making ecological awareness increasingly important. Rational and effective use of energy is a key factor in making our world more sustainable. In EU countries, about 40% of all energy is used by buildings, where ventilation consumes around 30%. More people are getting aware of the impact a good indoor climate has on wellbeing, health, and productivity of people so it is expected that the energy consumption for ventilation will grow in the future.

A conventional compressor cooling system requires synthetic gases for its operation which burden the environment. Providing a good indoor climate in the summertime by sustainable and cost-effective technologies will be especially challenging in the future. A potential alternative to conventional cooling is adiabatic evaporative cooling. Despite it being a step forward in providing a sustainable cooling of air there is a problem of high water usage. Tap water also needs to be softened and desalinated before it can be used for adiabatic cooling. A potential solution for this is using rainwater as a sustainable source for cooling.

In Denmark, a country with the highest rates of rainfall in EU, there was conducted a study of implementing adiabatic cooling with rainwater.

An advantage of IEC is that the only energy that needs to be provided to the system is the energy for the functioning of pumps and nozzles. Cooling of air is a result of a natural process called evaporation. Once water particles evaporate the sensible heat of air is transferred to the water vapor hence the cooling of air. Air-cooled by this process is saturated with water so it is not suitable for direct ventilation of habitable rooms. For this reason return air is used for adiabatic cooling. Fresh outside air is cooled by it’s sensible heat being transferred in a heat exchanger to adiabatically cooled return air so no moisture is added to fresh air. The temperature of adiabatically cooled return air can be at three different levels at the outlet of the evaporative cooler:

The main disadvantage of adiabatic evaporative cooling is that the air can only be cooled to wet bulb temperature of return air. For this reason, the regenerative indirect cooling system has been developed Adconair Adiabatic Zero GWP. The difference is that supply air after being cooled is led and mixed to return air and as a result precooling of return air is achieved before entering an evaporative cooler hence wet bulb temperature is also lowered. Consequently a lower airflow rate of supply air is present.

Since freshwater usage is not cost-effective a potential use of rainwater is investigated. Rainwater contains a low level of salt/calcium carbonate so the use of rainwater instead of tap water provides considerable savings because there is no need for softening and desalination and no effluent is produced. Compared with systems using tap water, rainwater systems require only half the amount of water to produce evaporative cooling.

The disadvantages of conventional cooling systems are high running costs, energy consumption, the global warming potential of using cooling refrigerants, service which calls for implementing new technologies for cooling. Adiabatic evaporative cooling, which could replace cooling refrigerants relies on water, and by using harvested rainwater, it could also support climate adaptation. Thus, the idea for this demonstration project was born. Case study for School Ventilation is presented bellow.

Project conducted by: Menerga Denmark, Christian A. Hviid
Time: May and June of 2019
Location: School Solbjer in Aarhus
Objective: Analysis of evaporative cooling using rainwater as a resource
Area of cooling: 537 m2 (second floor of the school)

School Solbjerg, Aarhus-Adiabatic cooling with the utilization of rainwater

Rainwater from the roof was collected in the existing gutters fixed along the roof and led in a pipe system to an underground rainwater storage tank with a capacity of 10.000 l. The volume of the underground tank was dimensioned to cover the shortfall of rainwater for the average time of drought periods. The air handling unit used for air conditioning was Adconair adiabatic zero GWP by Menerga. Collected and filtered rainwater was led to another tank and to the air handling unit where it was used for evaporative cooling. To prevent the risk of the biofilm-forming inside the unit the rainwater was disinfected by UV-light in storage tanks. To ensure the possibility of using adiabatic cooling in longer drought periods without precipitation, an additional supply of tap water was implemented.

In order to determine the thermal effectiveness of the technique, measurements were carried out in an adiabatic air handling unit (AHU). To identify the system capabilities, energy meters were installed in the adiabatic cooling system. In order to check the efficiency of discharged air humidification, air temperature and humidity sensors in outside air, supply air to the room, return air from the rooms and exhausted air were connected to BMS and logged. Sensors in the classrooms: temperature, CO2 and PIR were installed to monitor indoor climate.

The main findings are below: 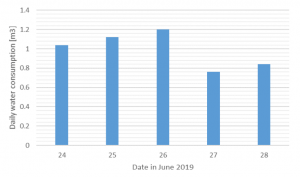 To conclude, evaporative cooling using rainwater as a resource performs as expected and has no operation disruption. This demonstrates that adiabatic cooling is a realistic alternative to compressor cooling, especially in a climate adaptation context where surplus of rainwater can be converted into a sustainable cooling resource.