Jeremy Rifkin: Green New Deal for Europe and why we need renewable energy devices in every building

Jeremy Rifkin: Green New Deal for Europe and why we need renewable energy devices in every building

Jeremy Rifkin, American economic and social theorist and a climate activist, had a powerful presentation at DLD 2020 (Digital Life Design) entitled A Green New Deal for Europe. He firmly believes that the Fossil Fuel Civilization is collapsing. 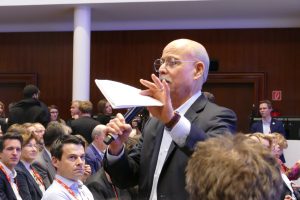 In his latest book, also entitled The Green New Deal, he makes the case that smart technologies in connection with renewable energies can still help to avert a climate catastrophe. But it won’t be easy, he believes: “It’s a razor-thin path.” His message in the book is clear. He calls for a complete rethink of energy production and distribution in order to contain the effects of climate change.

We have made a selection of his quotes from the DLD 2020 session he had in Munich last week, that have had a great impact on our understanding:

At Menerga we have been developing units and systems that support the vision of a fossil fuel free society. Our latest unit that helps buildings to vastly reduce their energy needs with the help of renewable energy sources is called Menerga Rewatemp. This is a hybrid device for additional use of renewable sources of energy. RewaTemp combines a heat pump and a chiller in one special hybrid unit. The system enables optimum simultaneous generating of heating and cooling energy with the help of renewable energy sources. More on this unit is available here.

See the entire presentation »A Green New Deal for Europe« by Jeremy Rifkin from the DLD Conference here:

Further opinions from Jeremy Rifkin can be read in the interview he gave for the DLD community.

Jeremy Rifkin has been an advisor to the leadership of the European Union since 2000. He has advised three presidents of the European Commission – Romano Prodi, Jose Manuel Barroso, and the current President, Jean-Claude Juncker – as well as the European Parliament, and numerous EU heads of state, including Germany’s Angela Merkel, on the ushering in of a smart green Third Industrial Revolution economy.

Rifkin is the author of 21 bestselling books about the impact of scientific and technological changes on the economy, the workforce, society, and the environment.